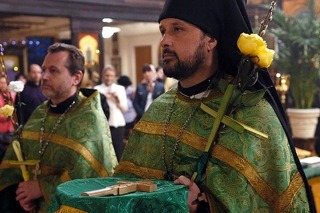 Here’s the first interview in our FaithStreet Leaders Speak series, a series of interviews with Christian leaders in New York City. This week we interviewed Father Christopher Calin, Dean of the Cathedral of the Holy Virgin Protection on the Lower East Side on how New Yorkers view church, whether interfaith efforts work and what gives him hope for NYC.

When you began at Cathedral of the Holy Virgin Protection, the church had $1,100 in the bank and you were on food stamps. Now your church is solvent and 150 families attend. How did you do it? Did you do any advertising or marketing?

It was 1985 and I didn’t do it myself, there were a few of us, some existing parishioners who were shouldering the daily responsibilities, and a few new people who like me, were disaffected with the Church but were drawn back in by the challenge of the Cathedral. It was a an experiment, a last ditch attempt. The first thing we did was work to improve the building which had fallen in near ruin from neglect, and was in REM foreclosure due to required non-profit paper work not being filed in a timely manner. We did try a few ads in the New York Times for Easter but found that they yielded very little payoff. We began hosting inter-Orthodox events here (retreats, social gatherings), publishing a regular Newsletter and building up a mailing list. We organized a wonderful choir that sang primarily in English, rather than Slavonic, which was a draw for many new folks. We increased our weekly schedule of services and had the church open and available more often.

Do you think it would be harder to start a church from scratch or reinvigorate a declining congregation as you did?

Well, we did have a big building in New York City (30,000 sq. ft), and a community history of nearly 115 years in NYC and 42 years on Second Street. We capitalized on our venerable history, while at the same time reaching out to the community and city at large. So in that way it was easier than staring from scratch. On the other hand we had a building that had become way too big for our meager resources, saddling us with huge daily expenses.

Some NYC churches spend a lot of $$$ on marketing. They purchase advertising space on Google and buy out entire cars on the Subway. Good thing?

We have our website and bulletin, our church is often open, there are lots of services done with dignity and beauty. I think those big ads online or on trains and newspapers only appeal to a limited groups of people who already identify themselves as “religious.” So the best you can hope for is to steal a few (very few) sheep from other churches. So no, for me, that’s not profitable or desirable.

You describe your church as “fairly progressive.” Are the ancient traditions of the Orthodox church relevant to modern-day New Yorkers?

The ancient traditions are our links to Christ and the Apostles, the early, persecuted Christian Church, and the Church throughout the ages as it has been inspired and guided by God the Holy Spirit. Our focus, our “whatness” (essence) lies in our worship, and the virtues that flow from it (love, charity, forgiveness, peace) into our daily lives. We retain a deep sense of dignity and holiness in the temple. Our worship is based on that which was done in the Temple of Jerusalem before its destruction in 70AD, with “psalms and hymns and spiritual songs”, and the offering of the eucharist ( the bread and wine which become for us a participation in the body and blood of Christ) replacing the animal sacrifices. We do not use musical instruments other than the human voice (choirs and chanters). The regular Sunday Divine Liturgy took it’s current form in the 8th century and aside from being served in the vernacular, remains largely unchanged. The people that come here are looking for a transcendent worship, holiness, otherworldly worship that bridges the physical and spiritual, the temporal and the eternal realities. Not an easy task in the East Village, or anywhere for that matter. It takes work to create that environment, and even more work to allow one’s self enter into it. Coupled with regular fasting and daily prayer, it is a lifestyle that leads to change and must be chosen freely. I think that is very progressive.

I lay blame on some Christians losing their focus to fulfill the commands of Christ, and instead truly making the church a bully pulpit for discrimination. This is especially obvious when the church becomes involved in politics and fails to understand that we lives in a democratic secular society and not the Byzantine Empire, the Holy Roman Empire, or any of the defunct theocracies of the past. We should not force our morality or world views on anyone. Faith is a free choice, not a innate condition. God’s love does not compel us, but demands that we freely respond to it, otherwise it would not be love at all, but something quite the opposite. I think that when people see religions trying to force their morals and beliefs into the public square they rightly react to it with disdain and rejection. This is  country founded on the principles of equality and blind justice for all citizens. When religions try to limit that, they are on the wrong side of history, and should be rejected since they will ultimately become extinct.

What would you say to a New Yorker who says, “Why should I put my faith in God?”
Very little. I can only speak from my own experience and cannot pretend to know theirs, or rattle off a few scripture quotes and pat answers. I would say though, that there is more to life than what we see here, and encourage them to look inward and plumb the inner universe  of their soul. They will be surprised.

I know your church works with an interfaith group called “Local Faith Communities of the East Village.” I read that you all worked on behalf of a mosque to remove an explicit advertisement that was placed across the street from the mosque at the start of Ramadan. Why do you think interfaith efforts are important? Why’d you choose to pursue this venture in particular?

Initially to overcome fear and prejudices between us, but now it is to show that religions must be a source of unity and not disunity. We are a drop of water in a huge ocean of religious intolerance and triumphalism and discrimination, but we are trying mightily to show others the way. Now when I walk by another church, or temple or mosque or ashram, I feel a connection, and warmth in my heart and not scorn or distrust. When we are face to face there cannot but be a communion of persons, a tiny glimpse of the promise of peace on earth that all faiths profess to desire. The Psalmist David wrote, “Seek peace and pursue it.” That’s what I believe we are doing together.

Do you think NYC churches do a good job of working together?
No. But that is not the point. We need to know and respect each other first. Our little group doesn’t hold ecumenical prayer services that seek the lowest commonality, and reject our highest held doctrines and ideals. We don’t need that or want it. In fact, it would have prevented us from  coalescing and working together since it would have compromised each group in some way. No. We respect each others beliefs and traditions but do not try to admix them into a tasteless ecumenical stew.

Do you think NYC churches do a good job of working together across racial, socioeconomic, neighborhood and other barriers?
Again no. The bigger and richer churches have political clout and can control who get elected to public office. They often allow their institutions to be co-opted for political purposes and thereby curry even more favor. Its not the way for us here. We are working to be the “Church,” those called out by God, who have freely chosen to respond to His call to holiness and human dignity, and to personally grow in the likeness of Christ daily and hourly.

What discourages you about NYC? Gives you hope for NYC?
Discourages: The noise. The desperation of many. The loneliness and disconnection of humans living on top of each other. The bureaucracies that complicate or confound our mission to be a religious community. The financial inequity.
Hope: The future. The blue sky between the buildings. Central Park, Tompkins Square, Washington Square. People connecting and working for the common good

Where do you go in the City to relax?
No where. I go to The Catskills as often as possible.

If you weren’t a pastor, what would you be?
Probably unemployed like so many are now. Or working in Family and Children Services as a psychiatric caseworker.

New York City is a very transient city. Is it frustrating doing ministry with people who often aren’t going to live in NYC for more than a year or two?
Well, I’m never bored. We have a group of steady members, but about ¼ of the parish changes from year to year. We are culturally diverse with about 25% of our parish consisting of adult converts to the Orthodox Church, 40% immigrants from Georgia, Romania, Greece, Russia and Ukraine, and 35% US born cradle Orthodox (like me). We’ve been in New York since 1870 and here on 2nd Street for nearly 70 years. I’m confident that the Cathedral will continue to change and grow according to our ability and desire, if it is God’s will.